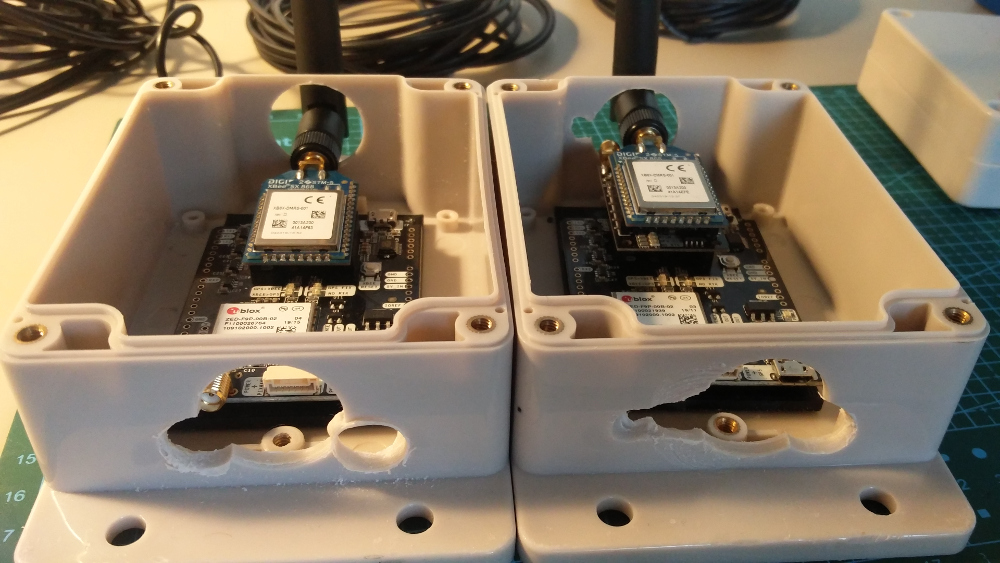 As you might have seen from two of my previous posts (1, 2) I have been doing some testing with ublox F9P based ArduSimple RTK setup. In this blog post I’m describing how I integrated these modules with Robot Operating System (ROS).

Please see my first post in this series to learn more about my ArduSimple setup the short story is I use simpleRTK2B for my base station and simpleRTK2B+heading for the rover.

Since I managed to break the whole configuration by overwriting it with the ublox ROS node by using a wrong config, I had to fire up the u-center application. From ArduSimple Github Repo I’ve downloaded the following configuration files:

To flash the config files I’ve followed instructions on ArduSimple website. When writing the configuration file pay attention to the firmware version and if needed follow these steps to update your modules.

When flashing the ublox configuration following the above guides the checkbox for storing the configuration files was disabled. My assumption at the time was that F9P will automatically store the settings in the memory, however it turned out I was very wrong on that and I’ve noticed this only after switching back and forth between Windows and Linux numerous times.

To save the loaded config you will need to save it in View->Configuration View->CFG, Select all Devices and press the Send button at the bottom of the window.

When searching for the ROS driver the most important feature I was looking for was the support of UBX-NAV-RELPOSNED messages that would provide the relative heading between the two rover antennas.

My ROS package of choice that would support F9P became ublox by Vijay Kumar Lab. As I noted in the previous section using this package I’ve overwritten the modules configuration by running some of the example launch files in the repository. It took me a while to realise the misconfigurations in the modules but when I did I made sure to have the option config_on_startup: false in the .yaml file for my rover config. You will find the yaml file that I used in my experiments below:

The ArduSimple launch file I used looked as follows:

After launching the above file I could echo /gps/fix topic for the GPS messages. When you do that in the RTK setup pay attention to the covariance fields, if they are very low then you most likely have a great view of the sky and the base unit is providing good corrections. To see the relative heading between the two modules you can check the /gps/navheading topic.

In this blog post I wanted to provide the simplest example that you could run just with the RTK hardware and no other sensors. As a test I’ve created a basic setup for robot_localization and navsat_transform_node to create a working TF structure. The only data I was fusing in the EKF was the GPS fix message and the relative heading between the modules.

Because I only have information from GPS this setup does not adhere to REP-105 - we don’t have any source of odometry that would be continuous. That’s why you usually use GPS as one of the inputs providing a map->odom transform (more on this in the last section).

There are two nodes that I used here:

You will find all the configuration files that I’ve created in ardusimple_rover repository. There are two things to note here: because the observed rotation between the modules (/gps/navheading topic) is relative the navsat_transform_node will have an error in orientation. Normally you would use an IMU instead which should produce the correct results. The only two topics that are fused in the ekf are /gps/fix and /gps/navheading - in a real setup you will want to use information from your other sensors.

Due to the lockdown I was only able to perform a test in a residential area, driving a car with two rover antennas attached to the roof. I’ve placed the base antenna in a fixed position and let it run for a couple minutes. After manually adjusting the yaw_offset parameter of navsat_transform_node to align odometry with true gps coordinates I was able to get the following result in mapviz:

Above you can see the following information:

The setup I described together with the demo repository should get you started on integrating and testing ArduSimple RTK boards (probably anything based on U-blox F9P too). If you wanted to integrate this solution on a mobile robot then you would run two instances of robot_localization:

For more information on how to pull this off you can see the robot_localization wiki.