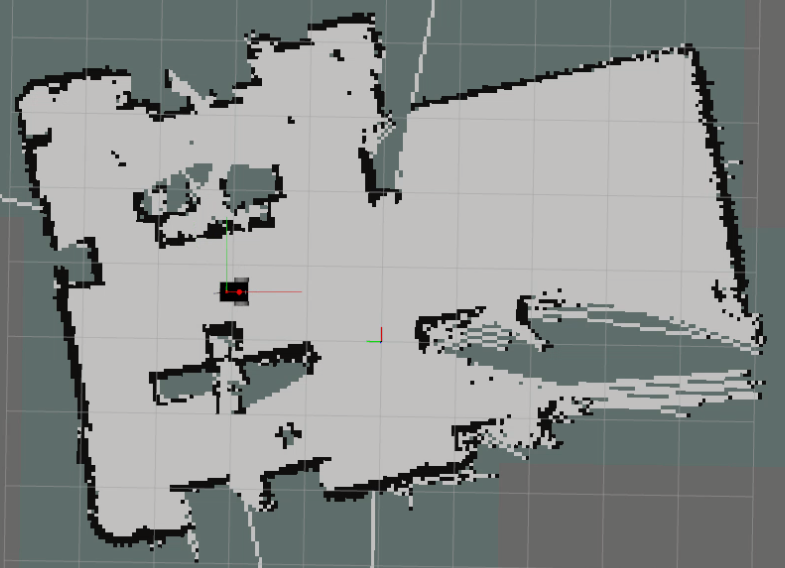 If I knew how to draw I would create a header for this blog post that would show a lama getting vaccinated. Since you won’t be seeing it any time soon, let’s jump into iris_LaMa, a localization and mapping library that works with ROS.

Similarly to my previous experiments (T265 test and slam_toolbox evaluation) I’ve run the test described in this post on a Robosynthesis development platform.

The only difference from the previous posts is that I added an IMU, therefore the fused robot odometry should be a tad bit better. Highlights of the setup are as follows:

LaMa is the library developed by Intelligent Robotics and Systems (IRIS) Laboratory at the University of Aveiro. The package is maintained by Eurico F. Pedrosa and is open sourced under BSD 3-Clause licence.

Getting started with LaMa was very simple - pull the two repositories, build them, change couple of parameters (scan_topic, global_frame_id, odom_frame_id, base_frame_id) to match my platform and run it.

There are 3 nodes of interested in the ROS package:

In this blog post I’ll focus on the first two nodes.

The first impression I got using this SLAM package was that it “just works”. Out of the box without tuning any parameter values except for the frame name changes the SLAM seemed to perform very well. For the full parameter list you can see the project readme. I found that the number of parameters you can tune is smaller than in case of other packages I used so far (looking at you Cartographer). The good thing about it is that you don’t need to spend so much time tuning the parameters to get good results, on the other hand you might not have so much flexibility.

With the localization node you can start a map_server and the localization node will work with the map coming from the server. Currently the node doesn’t support global localization (as per Readme.md) but instead you can send the robot pose on the /initialpose topic (this means that if you set the pose estimate from RVIZ it will work too). I found that even if you set the pose ~1-2m from the real robot pose it converged to the true pose as the robot is moving around.

Since I already covered slam_toolbox in one of my previous posts I’ve decided I would try to see how they compare. Do you think arbitrary comparisons of two SLAM results is meaningless? Me too! But I’m going to do that anyway.

Above you will find a video comparison of online SLAM with iris_lama compared to slam_toolbox. I run the two solutions with default configs and only changed the platform related settings (mostly the names of frames and LiDAR range). Here are some of my observations on LaMa:

It’s quite possible that some of the things above can be tuned through parameters, however I didn’t find any obvious parameters described in the readme file.

Another thing I wanted to know is how does the position estimates compare. For this reason I have used the evo Python Package and described my workflow in full in my previous post. In the screenshots below I have used the output from iris_lama as a ground truth:

What these images tell us is that most of the time the output of both packages is quite close to one another (you can right click on the image to see it in full size). The issues with this comparison is that without ground truth we can’t say anything more about it, which brings me to the next section.

I think the biggest advantage of iris_lama is its low CPU usage (In the project readme author says that it runs great on Raspberry Pi 3B+). Here is the comparison of CPU usage of iris_lama (left) and slam_toolbox (right).

You will see that the LaMa CPU usage peaks at around 15% and slam_toolbox at 450%. I hope that one day I will get to repeat this experiment in a larger environment and see how both packages manage it. I grabbed the CPU usage of both packages using cpu_monitor package and running it along the bag file with raw data and each SLAM package. Then I plotted the output using PlotJuggler.

Here are some links that can provide you with further reading or allow you to replicate my results.

I’ve recently received a simpleRTK2B+heading module from ArduSimple which should get me sub centimeter level position accuracy. This should be a decent source of ground truth for my follow up experiments. Stay tuned for more information in the next post!